Video analysis is critical for athlete development. Adding sensor data to video makes the process more objective and easier to understand for the athlete.

What's in this article

This article includes a broad overview on enhanced video analysis. In particular, it covers the following:

What is enhanced video analysis?
Enhanced video analysis is involves the marrying of objective data with video. Combining both data and video gives athletes and coaches a clearer understanding of what is happening and its impact on speed, acceleration and other metrics.

Automatic and manual video syncing - What is it?

Automatic syncing is when the video software (e.g. Dartfish or Telemetry Overlay) can automatically link each video frame with data recorded from Protern.

All that is required is the full Protern session and time coded video. The video software will automatically determine what data to include in the video for a fast and accurate sync.

There three ways to get UTC time coded video:

Tip: How to automatically sync Protern Data with video.

Manual syncing of video and Protern data involves lining up the video with the start of the Protern data.

While this process is more time consuming and less accurate, it can be useful if you do not own a camera with a microphone port or can use a GoPro.

Tip: How to manually sync Protern data with video.

A follow cam is when the coach follows behind the athlete with a camera. Generally a small and light camera like a phone or GoPro is used.

A static camera is a camera located in one place on the hill. This could be on a tripod, or a coach standing on the side of the course. Dedicated cameras with a high optical zoom are often used.

POV is useful in SkiCross as one athlete's camera can act as a follow cam for the other athletes to see line choice.  A helmet mounted 360° type camera is ideal to ensure all the angles and action is covered regardless of the position of the athlete.

Drones are used rarely, as most mountains do not allow them on the hill. They can be used as a fast follow cam (i.e. they can fly back up to capture the next athlete), however the high angle is less useful for feedback.

Types of data to display on video

Speed is the most common metric displayed on the video. The value can be shown as a graph or a speedometer. For either view, it is helpful to compare two videos to see the actual speed difference in different sections.

Acceleration data shows how much the skier speeds up and slows down during the run. This, paired with speed, gives the athlete an objective measurement of the impact of a tactic or technique.

Protern can generate a number of turn related metrics, including average g-force, energy dissipation, and entry and exit speed among others. This level of video integration can helpful for more in-depth analysis sessions rather than everyday analysis. 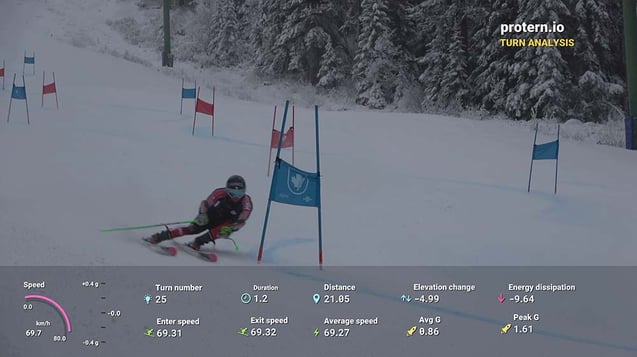